Assessment and testing in early childhood? No thanks! 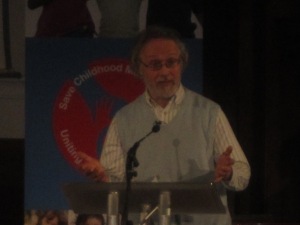 This is a guest post by campaigner Dr. Richard House; he lectures in Early Childhood at the University of Winchester and is a founder member of Open EYE, Early Childhood Action and the Save Childhood Movement. Dr. House is an avid supporter of our summer born campaign and we are very grateful to him:

“Ofsted head, Sir Michael Wilshaw’s recent pronouncements on early childhood assessment (see here and here) are underpinned by so many erroneous assumptions and politicised agendas, it’s a job to know where to start. Wilshaw starts from a taken-for-granted datum of England’s school starting age of 4, which is absurdly low by international standards; and his recommendations for ratcheting up ‘schoolifying’ assessments in early childhood are then founded on taking for granted precisely what should be challenged – i.e. England’s school starting age – and which is actually generating the very ‘problems’ that he then invokes ‘more of the same’ to ‘solve’! This arrant madness really is a ‘paradigm case’ of finding oneself in a hole, and then digging all the more furiously.

As of 2013, nearly 9 in 10 of the world’s 205 countries have a school starting age of 6 or 7, and hardly any countries in the world have the effective school starting age of 4 that we have in England. This, then, is the backdrop against which all that Michael Wilshaw is proposing needs to be seen. Wilshaw’s and Gove’s agenda of “driving up” early years standards is all about shoe-horning our hapless young children into institutional schooling at the tender age of 4 – and it just has to stop. You can do your bit by voting against Wilshaw’s absurd proposals for more assessment of young children here.”

This entry was posted in MEDIA COVERAGE, THE DEPARTMENT FOR EDUCATION. Bookmark the permalink.

1 Response to Assessment and testing in early childhood? No thanks!