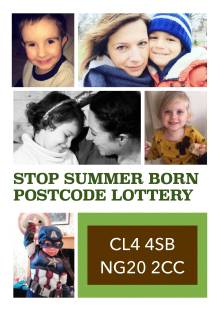 Ten months ago (a significant amount of time in a child’s life, and a whole primary school admissions cycle that left hopeful parents once more distraught and disheartened), the Schools Minister Nick Gibb published an open letter announcing the DfE’s proposed changes to summer born admission rules and asking “councils and academies to take immediate action.”

His letter, and the accompanying DfE press release, set out “the government’s plan to make a change to the school admissions code. The change would mean that schools can… admit summer-born children to reception class at the age of 5, if their parents want this [and] make sure the children can stay in this year group as they progress through school.”

Of course they already ‘can‘ do this, but the 2014 School Admissions Code provided them with the loopholes they needed to refuse, and so the postcode lottery got worse.

More recently though, there have been concerns from parents that communication from the DfE is not always as helpful or supportive as they might expect, given Mr. Gibb’s vehement support in his September 2015 letter, and it is on this point and others that I have written to the Minister and DfE today.

My colleague, Michelle Melson, has also written a letter to Neil Carmichael MP, Chair of the Education Committee, to ask whether there any plans for them to further consider this issue or to make contact with the Secretary of State for Education and establish when the promised School Admissions Code consultation will be published.

While there may be valid reasons for a Delay, the Summer Born Campaign is witnessing increasing levels of Desperation and Despair in some parents, and continued Disadvantage for many summer born children.

It’s hard to believe it’s been nearly four years since I first realised that by virtue of our son’s birthdate he would be penalised for starting school on time, and it puts into perspective just how long parents have been waiting for a much needed change to the law.

This entry was posted in CAMPAIGN UPDATES, MEMBERS OF PARLIAMENT, THE DEPARTMENT FOR EDUCATION. Bookmark the permalink.