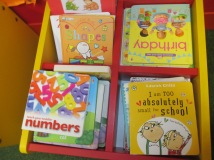 The Summer Born Campaign welcomes the DfE’s Delayed school admissions for summer born pupils report, as it confirms:
– the DfE is fully aware of the admissions postcode lottery
– the DfE knows children are being forced to miss a year of school
– parent requests for CSAge entry are increasing
– the DfE needs to improve communication of admissions information, and ensure equitable access for, all parents (as we predicted in 2014)
– the DfE needs to widen its focus from academic attainment to social, emotional, cognitive and behavioural benefits (these don’t appear in the report or parent survey)

What’s wrong with the report?
Just some key points:

1) Exclusion of summer born children with SEN
“We have limited this analysis to pupils that do not have a SEN flag in both Reception year and Year 1.”

This hides important data. By excluding children with SEN, many of whom were only permitted entry to Reception class at compulsory school age precisely because their parents were able to ‘prove’ SEN diagnosis in their application request (many admissions authorities insist on this), it distorts the DfE’s analysis of benefits, and results in headlines like this one: School delay does not help summer-born, study shows (BBC)

Reducing SEN diagnosis, and improving outcomes for children with SEN, are hugely important benefits of allowing CSAge entry to Reception class, so where is the logic in discounting all of these children from a research report tasked with deciding whether the school system and children are benefiting from a policy of admissions flexibility?

To analyse benefits of a CSAge start versus age 4 are, the DfE needs to ask:

– ‘How much better did those children with an age 5 start do compared with HOW THEY WOULD HAVE DONE if they’d started at age 4?‘
– ‘Are the educational outcomes of children born between April and August improving (i.e. what are the overall scores for summer born children compared with previous years, and what is the gap between their overall attainment and that of their autumn born peers – is this gap closing?)‘

It doesn’t matter whether CSAge summer born children ‘only’ outperformed their age 4 entry peers by 0.7 or 0.87 marks; what matters is how much lower their marks might have been without CSAge entry.

In fact, what’s more important to observe in the DfE’s comparison is that CSAge entry is working well. There had been fears that 5 year-old summer born children would drastically outperform their peers, or be bored in school, yet these figures show that they fit right into the mix. It’s a positive result. 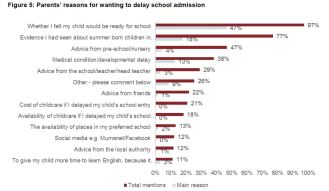 The DfE’s analysis focuses on results from the Year 1 phonics test (in itself not without controversy), ignoring natural cognitive development considerations, and the social, emotional and behavioural benefits that summer born children (plus their families, teachers and classmates) may experience following CSAge entry.

Notably, the survey for parents didn’t even list these as potential reasons, and more than a quarter (26%) of respondents needed to select ‘Other‘ in order to provide their answers.

It’s deeply concerning that after more than 6 years of correspondence with parents of summer born children, the DfE has still not grasped that their child’s phonics test results (or Key Stage tests for that matter) is not their main motivation for choosing CSAge entry.

4) No reference to cost
In January 2017, when the DfE’s Minister Nick Gibb said, “We are currently undertaking evidence gathering and analysis to estimate the potential costs of providing more flexibility for summer born children”, the SBC highlighted numerous cost savings, including SEN.

The Schools Minister also raised concerns about cost in an October 2016 Parliamentary debate (above), and yet neither the DfE’s survey questions for local authorities, nor its research report, mentions cost.

This may emerge in a future report (the survey did ask local authorities if they’re willing to be contacted to discuss their answers in greater depth later), but it appears to be a strange omission.

5) The data doesn’t provide strong “evidence”
There are thousands of admissions authorities making decisions about summer born children’s entry to school, and only 92 out of 152 local authorities responded to the DfE’s survey in 2017.

The DfE research allowed local authorities to “estimate values” and it was evident that some included “own admission authority schools in their area in their figures“. Some “provided only partial responses“, and small figures had “the potential to distort changes in proportions“.

So while we welcome this report for the information it provides, and the media discussion it initiates, it’s clear that the data collected isn’t as robust as it needs to be, positive outcomes are being overlooked, and the DfE’s decision to exclude outcomes of SEN children from its analysis needs to be challenged.

Parents
• Parents with higher incomes were significantly more likely to delay their summerborn
child’s admission to reception. However, the small sample size means this
finding is at best indicative.
• A majority of children whose admission was delayed were born in the later
“summer months” – 22% were born in July and 53% were born in August.
• In certain local authorities there was a sizeable discrepancy between the
proportions of black and white British primary pupils relative to the proportion of
survey respondents in those same areas, with white British respondents being
vastly overrepresented.

Early evidence
• In-house analysis of the only data we have so far on these pupils (phonics data)
finds an increase in phonics scores of 0.87 marks for delayed entry summer-born
children between 2014/15 and 2015/16, but that is not a statistically significant
improvement. This implies that we are not seeing a significant impact of delaying
admission to Reception on the performance of pupils in the Phonics Screening
Check.

This entry was posted in CAMPAIGN UPDATES, THE DEPARTMENT FOR EDUCATION. Bookmark the permalink.