Despite existing primary legislation (see pgs.19-26 here), these children are being REFUSED RELEVANT ENTRY to school in Reception class & FORCED INTO YEAR 1 instead:
1998 SSFA: Reception is for “pupils aged five and any pupils under or over that age whom it is expedient to educate with pupils of that age“; Relevant Age Group is “the age group at which pupils are or will normally be admitted to the school” (2012 Code also added: “e.g. reception or year 7” but clarification deleted in 2014).
1996 Education Act: The “general principle that pupils are to be educated in accordance with the wishes of their parents“; “Duty of parents to secure education of children of compulsory school age… shall cause him to receive efficient full-time education suitable to his age, ability and aptitude“. 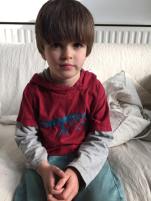 CIAN – Born August 30, 2010 – CSAge 2015 entry
Facing forced Year 1 start at any school with available space. Parents’ request declined by LA, accepted by CoE school, but LA didn’t pass application to school on time, so governors are considering after all ‘on-time’ and oversubscribed applications.
“I need an appropriate setting as I am on the Autistic spectrum. Without a school place, my transition to school can’t be planned, which puts me at a disadvantage. Starting in Year 1, I will miss a whole year of school and be even further behind my peers. I will need a lot of support that isn’t available and won’t cope.“

ZACH – Born August 15, 2011 – CSAge 2016 entry
Facing forced Year 1 start. Parents’ 2014 request refused by three schools under pressure from Birmingham LEA; also requested DfE intervention and in meantime holding a place another child could currently benefit from.
“I am only 3 and they want me to go to school this September – even though I have had numerous operations and medical challenges, with more to come. I’m not being allowed into Reception when I’m ready like other children are, and Year 1 will be full. They’re forcing me to be a square peg in their round hole.”

SETH – Born August 11, 2011 – CSAge 2016 entry
Parents’ request for Reception at CSAge refused by Birmingham LEA.
“I would love to go to my brother’s big school when I am a ‘bigger boy’ but for now I want to stay and play part-time at nursery, spend time with mummy at the park, and go on the train with teddy.”

LUKE – Born August 19, 2011 – CSAge 2016 entry
Parents’ request to enter Reception at CSAge denied by West Sussex; and facing forced Year 1 start (unlikely to be in oversubscribed school where older sister attends). Parents declining place offered for September 2015.
“I have SEN and find it hard to talk and understand what people are saying. Some children find it hard to know what I’m saying too. I just need more time so that when I go to school I can enjoy it. West Sussex say the only thing I’ll miss by joining Year 1 is school familiarity because I go to nursery part-time and can learn enough there.”

BELLE – Born August 20, 2011 – CSAge 2016 entry
Facing forced Year 1; offered a Reception place 2015 after parents withdrew application. Request made and rejected twice in Liverpool.
“They said there is no evidence to show a quantifiable achievement gap between me and my peers, even after my nursery teacher and head teacher said it’s in my best interests.”

FINN – Born August 3, 2011
“I have a Reception place for September 2015 but my parents are currently talking to our LA about starting at CSAge instead. They have been asked to talk to the head teacher of the school I have a place at but Wirral Council want me to start school this year. I am still napping and having accidents, I like to run around a lot and can’t really put on my own clothes or eat with a knife and fork yet. I’d like to have another year at home and forest school developing physically and socially before starting Reception in 2016 but my mummy is worried I will be made to go straight into Year 1.”

LOGAN – Born August 4, 2011
Initial enquiries in Essex have received mostly negative feedback on a possible 2016 CSAge start in Reception, hence tactical approach to request a 2016 start from the outset, against current government and LA advice to apply for a 2015 place ‘just in case‘. Admissions application will be made next year so outcome unknown at present. Logan is emotionally insecure and I am worried he would not cope and would be bullied if he went to school this year, when he will be just over 4 yrs old!

NOTE: These are just some examples of the challenges being faced by parents; many more have chosen not to speak publicly because they fear it may adversely impact already tense relationships with schools and councils as they continue battling for their child’s fair access to a full education.

This entry was posted in CAMPAIGN UPDATES, EXAMPLE CASES. Bookmark the permalink.